WITH THE recent launch of the online database Legacies of British Slave-ownership project, which provides details of the £20 million paid to slave owners, key issues have been raised not only about the whole debate regarding reparations and apology, but also family genealogy.

The records hold details of over 3,000 absentee plantation owners along with 46,000 claims for compensation that provide rich information to research either the European side of your family history, or potentially your roots in Africa.

I have traced my family history from Wolverhampton, Jamaica and Senegal using records, oral history and DNA testing. The main focus has been on my mother’s side of the family and exploring the Shirleys from the Jamaican parishes of St James and Portland.

I found details of a Henry Shirley who ran a number of plantations, including Hyde Hall and St Petersfield. Shirley had a relationship with Sally Skiers, a mulatto woman, and fathered a son called Edmund. In many ways, Skiers is the maternal mother to all the black Shirleys of Jamaica and North America. The database provides details of a £1,286 compensation Shirley received for 64 enslaved Africans, which was trusted to his nephew Bernard Shirley. The compensation and the subsequent assets from income from the plantations went to the white side of the Shirley family in Jamaica and England. Edmund Shirley received £100 when his father passed away in 1858.

These records, along with the slave plantation records, have always been in the public domain and stored either at The National Archives or the House of Lords. But thanks to the growth of digitalisation, the power of the Internet and online databases, we can now a do a lot of this research from the comfort of our own homes. It contrasts sharply with the days when Alex Haley was researching his novel Roots: The Saga of an American Family (1976) and had to travel to the British Library from the USA in the 1960s.

However, the commercialisation of family history exposes a growing inequality when it comes to accessing information.

Companies like Ancestry have exclusive licences from UK and USA archives to digitise records and charge the public a subscription fee. It raises an ethical issue. Should descendants of the enslaved have to face the double penalty of paying for records and other related information to trace their ancestors? The good news is that a number of libraries and archives are making this information available free of charge.

The BBC programme Who Do You Think You Are? is a great brand using celebrities to demonstrate the accessibility of family history. However, it still reinforces a narrow version of Britishness despite using various black celebrities and personalities.

This is highlighted when you attend the Who Do You Think You Are? family exhibition which takes place in February each year. The original showcase was run by the Society of Genealogists, but over the past five years, thanks to the success of the television show, it has been completely rebranded. I have been going to the family show for the past 10 years and, until recently, I was often the only black person at an event which attracts up to 10,000 people.

Over the last few years, though, there has been a much bigger black presence. For instance, the late Ken Martindale - founder of Black British Heritage - had a stall promoting his work around the black presence in Britain. And I have taken groups to the show as part of a family history course. 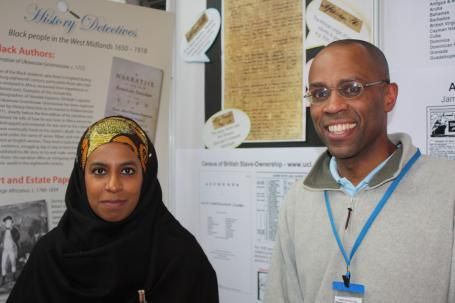 HIS AND HER STORY: Carlston Walters and Ayshah Johnston, of the Caribbean Family History Group Solihull and Birmingham, at the Who Do You Think You Are exhibition

Despite the impact of Haley’s book and the TV series, and more recently with Who Do You Think You Are? in capturing the lives of black personalities such as Colin Jackson, Moira Stuart, Hugh Quarshie and John Barnes, there is still a lack of awareness around family genealogy and intergenerational learning for the black community in the UK.

I have spent the past 14 years not only researching my family history, but supporting thousands of people through my website Every Generation with tips, advice, case studies, workshops and writing articles on family history.

But after all these years, we are still holding ourselves back from researching our past. Some of the barriers are within our families. When coming to Britain, many of the Windrush generation redefined their identities, which meant some of the family narratives were hidden or slightly fabricated. This applies for any migration community who started a new life in a new country. The consequences, however, are that second and third generation members researching their family history are not encouraged or are even lied to about key facts and information. This is one of the major barriers to researching black family history today.

Another major issue eloquently described by academics Dr Na’im Akbar and Dr Joy Leary, is post-traumatic slave syndrome; the emotional legacy of our enslaved past that still impacts us today in terms of our behaviour, cultural norms, parenting, relationships, lifestyle choices and in how we project our identity.

The trauma of slavery is still present within our subconscious 400 years later. It is reinforced by everyday racism and the consequences of government policy and globalisation.

By opening the family Pandora’s Box, the skeletons of the past may come to haunt us and for the majority of us, perhaps, it is easier to mythologise our African and Caribbean identities and not to explore, in detail, our personal family histories. This also applies to the white families who benefitted from the slave trade who may prefer not to know, or disguise or hide where their wealth came from.

Despite this, family history is an important part of the healing process. It enables us to move forward by recognising our family achievements and challenges of the past.

We need to reclaim our family history which will involve more soul searching within our own families and we must also demand resources and funding to support our research as part of a wider dialogue around reparations and restorative justice.

Written by Patrick Vernon and orginally published in The Voice Newspaper.

That the ‘Legacies of British Slave-ownership’ online database is free of charge and available for people to access here (The database incorporates data from The National Archives catalogue series T 71, the registers of the Office for the Registry of Colonial Slaves). - That the Slave Registers that have been digitised by Ancestry are available free of charge* here