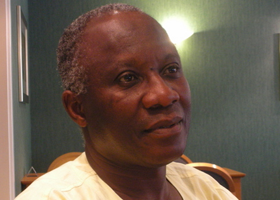 Akyaaba Addai-Sebo is responsible for putting forward the concept of a Black History Month in Britain, into what we recognise today, and is celebrated throughout the country. What follows is an edited version of an interview with Kubara Zamani, producer and presenter at Nubiart Sound Radio which first appeared in October's issue of New African.

The inspiration for Black History Month came from an incident that happened at the GLC where I worked as the coordinator of special projects. A colleague of mine, a woman, came to work one morning, looking very downcast and not herself. I asked her what the matter was, and she confided to me that the previous night when she was putting her son Marcus to bed he asked her, "Mum, why can't I be white?"

The mother was taken aback. She said that she was so shocked that she didn't know how to respond to her son. The boy that had been named after Marcus Garvey had asked why he couldn't be white!

In the US, I would lecture about Africa and its contribution to world civilisation. I would talk to many schoolchildren and their parents about the African genius, the appropriateness and validity of our traditions, moral code, hospitality and I would demonstrate how we lived in Africa, the games we played as children and the food we ate. Session after session, some children and their parents would come to me attesting their new found faith in themselves as Africans, and the change that the encounter had brought to their homes.

So when this incident with Marcus took place in London, it dawned on me that something had to happen here in Britain. I was very familiar with black history month in America, and thought that something like that had to be done here in the UK, because if this was the fountainhead of colonialism, imperialism and racism, and despite all the institutions of higher learning and research and also the cluster of African embassies, you could still find a six year old boy being confused about his identity even though his mother had tried to correct it at birth, that meant the mother had not succeeded because the wider society had failed her.

That also meant that the world out there and the happenings in it, particularly in the playgrounds and classrooms of the various schools in the UK were so strong and powerful that they denigrated that person's identity, which made that child question his identity as an African or being black. That was something that really touched me and so I reflected on it for many weeks. The only thing that came to me after those weeks of reflection was that something had to be done here in the UK to permanently celebrate Africa's contribution to world civilisation.

I drew up a strategic plan and discussed it with my colleagues at the GLC. The plan was to get some resources approved by the various legal committees of the GLC to support manifestations of the monumental contribution of Africa and Africans to the economic, cultural and political life of London in particular and Britain in general. We also did some consultation in the black community. In the end, we got approval for money to organise a series of lectures that took place in 1986-87. We invited, among others, the African American historian John Henrik Clarke, Frances Cress Welsing, Tony Martin, and ben-Jochannan to give talks at the GLC which were open to the community. Lectures were also held in Birmingham, Manchester and other cities across the UK. All the lectures were compiled and made into a book, called Our Story, edited by myself and Ansel Wong.

We also organised some cultural manifestations and brought in great musicians such as jazz drummer Max Roach, Kofi Ghanaba, Hugh Masekela, Burning Spear Abdullah Ibrahim, Courtney Pine, Tania Maria and many other artistes from the UK the Caribbean, the USA, Africa, Ireland and India to perform at the Wembley Arena and the Royal Albert Hall. We filled the Royal Albert Hall with schoolchildren from all over Greater London for a week, where they listened to inspirational music and talks. We decided then that this idea had to be institutionalised, and so the idea of Black History Month was born.

Although I initiated the idea, making Black History Month was a collective effort, and it could not have been achieved without the London Strategic Policy Unit, an organisation established after the Thatcher government abolished the GLC in 1986. There were many people involved, and it is difficult to mention everyone, but I can mention Ansel Wong, Linda Bellos, Ken Livingstone, Paul Boateng, Margaret Hodge, Anne Matthews, Narendra Makenji, Peter Brayshaw, Drew Stevenson, Bernard Wiltshire, Herman Ouseley, Ken Martindale, Vitus Evans, Chris Boothman, Lord Gifford, Bernie Grant, Shirley Andrews and Edward Oteng among the many. We managed to make this an all party affair. Politicians from all over the UK joined in this undertaking. We did not alienate anybody or group from this effort; we all contributed to make this a reality. Without that foresight, it would not have happened. The support was there because of the justification - in fact, its time had come.

The first Black History Month event in the UK was held on the 1st October 1987. We invited Dr. Maulana Karenga, the originator of Kwanzaa in the US. He was chosen specifically because of his relevance to what we were doing and because he had launched Kwanzaa which had become a successful part of the cultural calendar both in the US and the UK. He, together with the late Mrs Sally Mugabe, the London Strategic Policy Unit, the Inner London Education Authority and various politicians all worked together to launch the first events of Black History Month. This was followed by a series of lectures at the community centres of the various London boroughs. Later, the events spread to other parts of the UK because the African Jubilee Year Declaration that was launched here in July/August 1987 was also sent across the country but it took some time for the other boroughs outside London to adopt the declaration, which formally instituted the month of October as Black History Month in the UK.

We decided on October as the month to celebrate black history because apart from its significance within the African calendar - the period of the autumn equinox in Africa - October is consecrated as the harvest period, the period of plenty, and the period of the Yam Festivals. It was the time in history when Africa, Egypt and Ethiopia for example were the cradle and breadbasket of civilisation. October is also a period of tolerance and reconciliation in Africa, when the chiefs and leaders would gather to settle all differences. This was also the time to examine one's life in relation to the collective and to see if the targets set for oneself and the group during the past year had been achieved or not. You know that Africa gave the world the calendar. Our ancestors built the Pyramids, knowing about mathematics, architecture and astronomy. October was therefore chosen because of these factors. Black history Month is a reconnection with our source.

We were also thinking about the children, and what to bequeath to them. October is more or less the beginning of the school year; their minds are refreshed and revitalised, so they can take in a lot of instruction. This was also one of the reasons that October was chosen.

I believe that after 17 years of existence, Black History Month has become a major contributing factor in the building of tolerance and harmonious race relations in the UK. That is the reality, and it cannot be denied. The African Jubilee Declaration which gave birth to Black History Month is a legislative instrument and so the institutions of state are responding accordingly and honouring that duty required of them when they and their officers initiate activities to advance the cause of Black History month. The celebrations are therefore an established order in local authority function and in the enactment of their duties as enshrined in the 1976 Race Relations Act and subsequent amendments. The foundations of its success, growth and development are founded on solid legal grounds and it is these facts that nourish Black History Month every year in October.

The forward looking ones amongst us would rather work hard to enhance it to cover November and December and to connect Black History Month with the Mother Continent and with Kwanzaa and make the period Black History Season. Forward ever, backward never! This is what Garvey, Nkrumah, Henrik Clarke, Kwame Ture and Jake Carruthers taught us.